Feature Story Tools By Jaime Morrison This post may contain affiliate links. If you buy something we get a small commission at no extra charge to you. (read more)
Facebook Twitter Google +

The mobile app software Buildbox allows designers to create their own games without writing a single line of code. It’s a major step forward in the world of app development and game mechanics.

Although code does export into native frameworks for Android and iOS, there’s no need for anyone to learn development to work with Buildbox. It also expedites the process of creating hit games like Color Switch—a #1 ranked game in the app store built in just two weeks.

CEO Trey Smith shares his journey with Buildbox, how it works as a design/development tool, and future prospects for Buildbox users. 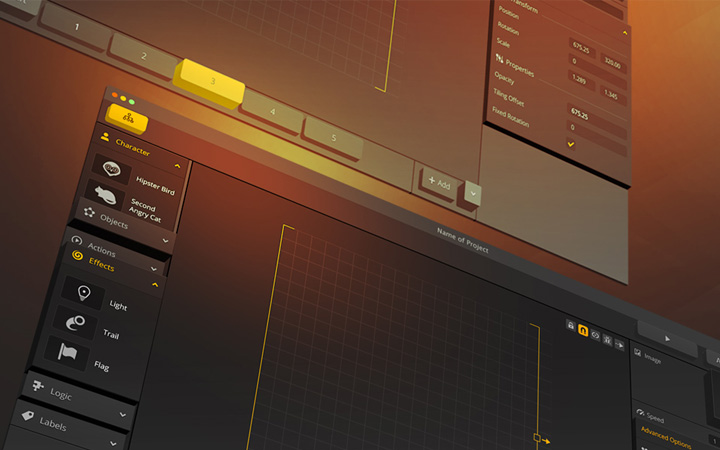 Can you share a little about your history before Buildbox? What got you into technology and drove your passion towards building software?

I actually got into software development through video games.

I’m a terrible coder, but have always had a strong interest in game design. I vividly remember playing the Sierra games like King’s Quest on my friend’s computer during elementary school. We would draft out our own levels on graph paper and have deep discussions on how we could alter the game. While I never became a decent programmer, I played around with it enough to understand how the process worked.

In 2010 I decided to create a video game after seeing the success of Doodle Jump. I understood just enough about development to know that this was most likely not a very hard game to create – even though it had done extremely well.

Over the next year I would hire an amazing developer from the Ukraine who now works with me daily. We would create many games that broke the Top 25 including the Doodle Jump inspired game Jump Pack.

How did the idea for Buildbox come about? What was it like in the early days when first building the product?

After helping many people start their own game business by outsourcing, I realized the biggest issue people had was programmers. Oftentimes programmers would not complete the job on time, be well over budget, or even sell the finalized code.

But to be fair this was not always the programmers fault. Sometimes the employer would lack management skills or simply not have a completed vision for the game they wanted to create. Regardless, outsourced programming issues were definitely a recurring trend.

This coupled with the fact I wanted to create games myself kicked off the desire to make a game builder. After trying everything on the market I felt there was definitely room for a new entry.

Even though I have a firm understanding of development, I could not make a decent game with any tool on the market. They were geared towards hobbyist developers who wanted to learn how to code.

I set out to create something unique that would cater to a different core audience. I wanted to create a new market around “codeless” development that would allow anyone to make a game without the use of scripting or if-then statements.

This opened up game creation to a completely new audience and it’s been really cool to see people make amazing games, like David Reichelt with Color Switch, and have zero programming skills. 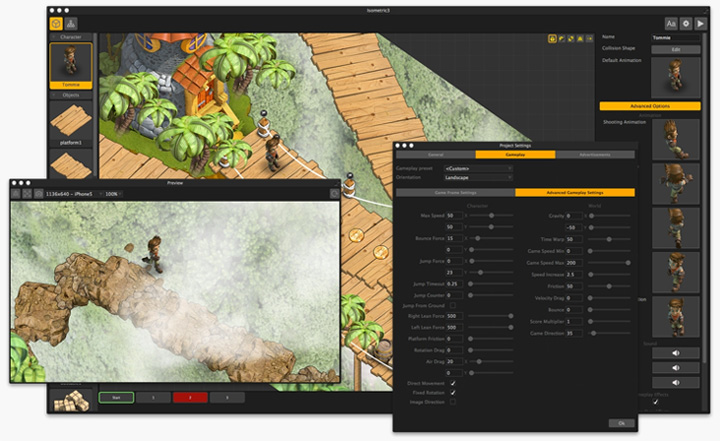 How did you plan an interface that could allow for game assets, interactions, animations, and controls all within one program?

I designed most of the user interface and admittedly it was a difficult process to create a fluid experience in the software.

My inspiration for the user experience was not Unreal or Unity, but instead PowerPoint. When devising the initial interface plans I played with Keynote and PowerPoint to understand how they allowed users to navigate the software and interact with images.

My initial goal was to create software that was just as easy to use as PowerPoint. Now the software is arguably more complicated, but we’ve stayed true to the initial vision.

As we’ve added more features that could potentially complicate the software, it’s been a huge challenge to keep things easy for the end user. For Buildbox 2.0(launching in March) we’ve added many professional development features like a particle editor, logic pieces, and a completely revamped map that allows for multiple worlds.

All of these produced multiple challenges as a product creator but we’ve finally nailed down systems to make it all work.

What goes into Buildbox’s export feature that supports valid code for app stores? Has it been difficult getting support from Apple or the iOS review team?

Buildbox is written in C++ and we’ve developed a system that exports to each platform natively. When you export a game for iOS or Android it will be converted to the platform’s native code. This ensures the perfect integration of services and the best performance on a device.

Apple has been very supportive of Buildbox both as a corporation and review team.

Our customers had over 25 Buildbox games featured by Apple in 2015 so we couldn’t be happier.

Right now we’re at 15 people who are scattered around the world.

We have employees in Russia, Ukraine, Portugal, Pakistan, Chile and the United States. We started as a completely remote company, but recently moved our headquarters to Silicon Valley.

I run half the team and our CTO, Nik Rudenko, runs the other half. Nik focuses primarily on development while I split my interests on marketing, administration, and running our games business.

Last year our mobile game business did 25,000,000 downloads with multiple Top 10 games like Phases, The Line Zen and Endless Sky. This has been an increasingly important part of the business.

How does buildbox compete with native Xcode programmers and traditional UI designers? Can Buildbox offer a similar experience, and if so how does it operate fluently enough for someone to jump in and build an app?

The biggest benefit for using Buildbox is speed and investment.

As for speed, David built the hit game Color Switch with Buildbox in only one week. That’s pretty astounding and you rarely hear of development that rapid.

I made a game called Phases with Buildbox in under two weeks that broke the Top 25. And these are not the exceptions to the rules; we’re finding most customers report about the same lead times when creating their games.

Just yesterday someone emailed me asking for advice. They had spent $43,000 creating a mobile game that looked great, but it could have easily been done with our software for a fraction of the cost.

Of course not all games can be created with our software. But if someone is creating an arcade style game I believe it would be a much better investment to use Buildbox.

How does the Buildbox export process work? Is it friendly to developers who want to edit the code directly?

We have noticed many people locking down the source code on export and this was something I was adamantly against.

When you export source code with Buildbox it exports raw native code in the platform of your choice. You can edit this code anyway you see fit, including adding in new options when possible.

That said, because of the design of the software itself, it would be difficult to edit the code for certain tasks. For instance, if you wanted to change the actual gameplay of a game or add a new level, it would be much harder in code. But adding in a new SDK when the game loads would be easy.

Our users rarely want to add things in after export anyways. Instead they their save file within Buildbox to add features when needed.

If there’s a feature they want that can’t be found in the software, they typically discuss it in our forum. We then gauge feedback and add the most requested features.

Last year we added 80 completely new features to Buildbox after gathering feedback from the community. 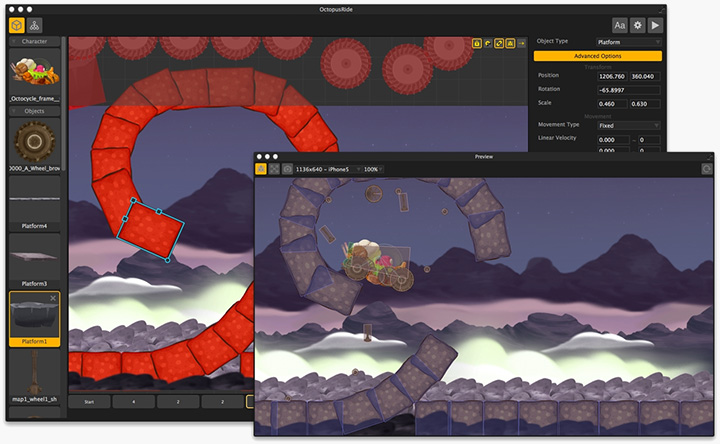 How do you keep up with new versions of iOS and new additional features? Did the shift from Objective-C to Swift play a role in Buildbox’s code structure?

Keeping up with new iOS versions is typically not too hard, though sometimes they make major changes that cause some headaches with the development team.

We always download the betas as soon as they’re available and have a new update to Buildbox ready when the OS is officially released. Sometimes there’s no action needed for our customers. But in the rare case Apple makes a dynamic shift with a new versions of iOS, Buildbox users can simply load their save files and export their game again to be fully up-to-date.

The switch from Objective-C to Swift was a nonissue for us luckily. Apple is fully supporting Objective-C which our system is based around.

We are looking at Swift and might change strategies as the software grows.

Are there any unique lessons you’ve learned along the way since launching Buildbox? Have you learned anything about building a product, or about the mobile app marketplace?

There have been many lessons learned during the 15 months since we released Buildbox. We’ve shifted and evolved nearly every aspect of the company from our hiring practices to how we develop products.

But I think the most important lesson for people who are thinking about creating any product is to focus on the community.

The first thing I do every morning is log into our support center and read tickets from customers. Then I head to the forum and scan messages from beta users to gauge product feedback.

This has been absolutely instrumental for us in so many ways.

When we are discussing the vision for the product or changes to our software, it’s always with the community in mind. And we don’t nail it every time. We screw up like everyone, but we learn from them through the process.

We find out what they really want from our software and then it’s our job to figure out unique ways to make that happen. We’ve seen many people grow their businesses with what we’ve created, and that’s the ultimate pay off. 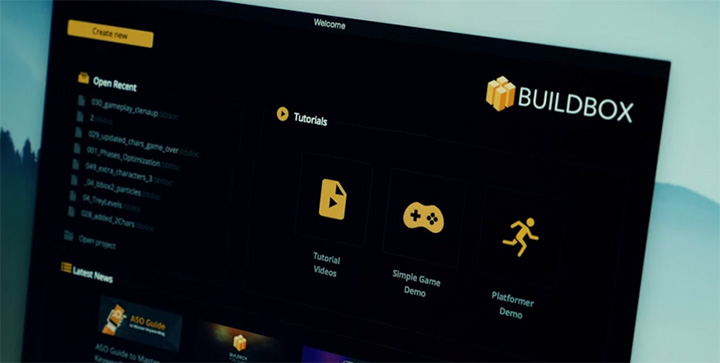 Lastly can you share any future plans or features Buildbox users may expect in the comings months/years?

Next month we release the biggest update to Buildbox yet: Buildbox 2.0.

There will be over 130 new additions and features to the software including a completely revamped user interface, multiple worlds, menu animations, and tons of options that greatly expand gameplay possibilities.

We’re fully focused on v2.0 right now, though always talking about the future.

I can’t discuss our specific plans but I will say we’re watching VR very closely.

Thanks to Trey for his time offering a look into this very powerful mobile game design software.