JavaScript Open Source By Jaime Morrison This post may contain affiliate links. If you buy something we get a small commission at no extra charge to you. (read more)
Facebook Twitter Google +

jQuery has slowly become the most trusted library for writing expeditious JavaScript. But could Umbrella JS become the newest JS resource for frontend developers?

Created by developer Francisco Presencia, this open source library offers many of the same features you’d expect in jQuery or MooTools. It’s licensed under the MIT License and available for free on GitHub.

Code syntax was heavily borrowed from jQuery’s library so there are many functional similarities. For example, jQuery uses $(selector) while Umbrella uses u(selector). But there are differences with some major functions like Umbrella’s ajax method.

You can see a live demo on JSFiddle showing a log output script with UmbrellaJS. 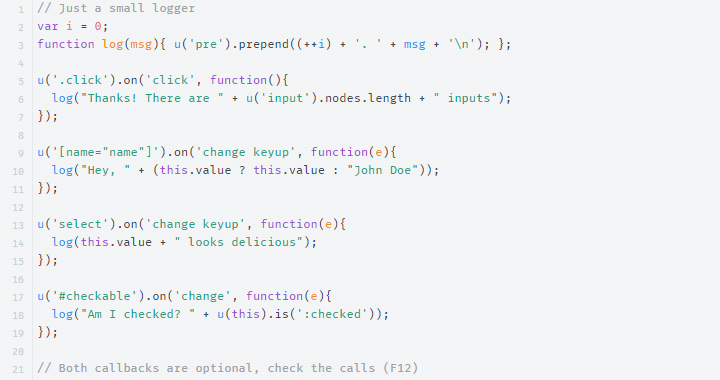 Every major function is fully documented on Umbrella’s official website. jQuery gurus will have no problem picking up this library and giving it a test run.

But with so much trust & support behind jQuery, it’ll be tough to see Umbrella uproot jQuery’s well-earned place in every developer’s toolkit.

While older versions of jQuery still support IE8+ this is not the goal of Umbrella. In fact Umbrella’s GitHub page openly states that IE11+ is the most recently supported MS browser – also likely including Edge.

So could Umbrella take jQuery’s place in the hierarchy? I’d say it’s highly unlikely. But that doesn’t mean Umbrella isn’t worth using in a live project.

You can actually test Umbrella’s support right from the website to see which methods are accessible for which browser versions.

So if you’re ever looking for a simple jQuery alternative, for work or for play, Umbrella JS could fill the role flawlessly.