Design Feature Story By Russell Hausfeld This post may contain affiliate links. If you buy something we get a small commission at no extra charge to you. (read more)
Facebook Twitter Google +

BurritoEclair, a moderator of the subreddit /r/PixelArt which collects user-submitted artwork and links to pixel art around the internet, was once inspired to couch surf between a few friends’ dorm rooms in New York City early in his career in the hopes of pursuing a job as a pixel artist.

“I got a few small freelance paying gigs. Eventually landed a short stint with GamesLoft in New York City,” BurritoEclair said. “I never moved to New York but I took a bus there and bounced between four people’s student dorms for a few months.”

He left New York after his experiences with GamesLoft gave him the impression that pixel art was only being used for mobile games. He assumed that he would have no future as a pixel artist because 3D graphics were becoming more and more prevalent in all forms of video games, decreasing the need for 2D game artists and creating a much more competitive market within the pixel art community. “I worked on a high number of projects with very little ever being completed or shipped. 3D jobs were starting to replace 2D pixel art gigs, so I was competing with people that were much better than me,” BurritoEclair said.

After returning home from New York, BurritoEclair — like many other aspiring pixel artists — quickly discovered that pixel art was not a dying trend. Communities were popping up all over the Internet. The indie gaming scene was developing and people began to realize the simplicity of creating designs and animations out of pixels.

Modern pixel artists are witnessing a shift in the public perception of the medium from a cheap way to make digital graphics into an art form worth critical appreciation.

A pixel is a tiny unit of measurement like an inch or a centimeter, but specific to digital measurements. These pixels are the smallest units of a picture that you see on a computer screen. If you take the pencil tool in “Paint,” set it to “1” and click just one time, you will have exactly one pixel.

The other moderator of /r/PixelArt, who goes by the username theboxingfox, describes pixel art as a similar artistic process to the tissue paper mosaics that many people made in grade school. Piecing together single crumpled-up pieces of colored tissue paper to create a final whole piece of art.

“It captures the true simplicity of the medium and when I think of it like that, it blows my mind what amazing things people end up creating,” theboxingfox said.

“There’s a grid, visible or not, that you arrange colors on. It’s not a perfect analogy, some things transfer over and some stuff doesn’t,” BurritoEclair said. “It can resemble something like ‘Mario’ on NES or ‘Metal Slug’ from the arcade. ‘Super Mario’ had some really neat pixel art designs.”

Many modern day pixel artists chase the nostalgia of games from their childhood like the original Mario and Legend of Zelda. Glauber Kotaki, a professional pixel artist who has worked on indie titles such as Rogue Legacy, Deep Dungeons of Doom and Duelyst, was infatuated with the pixel art style of his video games as a child. He eventually made his way into the Brazilian gaming industry in the early 2000’s as a pixel artist and animator.

“[Pixel art] brings a unique beauty to almost anything and can get you all nostalgic while doing so,” Kotaki said. “It’s also literally a cheap and quick solution for most 2D games, from its conception to its execution, for things such as animation and polish.”

The practicality of pixel art makes it ideal for independent video game developers. This is one of the most obvious reasons that pixel art is continuing to grow in popularity, with game distributors like Steam, Xbox Live Arcade, and the PlayStation Store devouring independent games in the past decade.

Games like Terraria, Superbrothers: Sword & Sworcery, and Shovel Knight have solidified the legitimacy of pixel art, as well as indie gaming, in recent years.

“Pixel art in modern gaming is great,” said David D’Angelo, one of the programmers at Shovel Knight’s Yacht Club Games. D’Angelo modestly said that it’s hard to tell whether or not indie gaming has helped spread the legitimacy of pixel art as a medium. But his team’s pixel-heavy game speaks for itself, having reached over 700,000 people by the end of 2015.

Even outside the video game industry it’s becoming easier to get work as a pixel artist.

His illustrations beg viewers to imagine a universe beyond the borders of each image; the worlds that he creates are so fleshed-out and seeping with detail. His art often has deeper meanings, such as his piece “The Fisherman’s Daughter” which is a metaphor for the power of optimism in difficult and desperate situations.

“Sometimes I don’t sleep — just thinking about the past and future life of my characters,” said Navarro, who was previously a children’s book illustrator.

Navarro’s pixelated illustrations are revolutionizing how people see the pixel as an artistic medium. He and a handful of other artists use pixel art to create standalone pieces of artwork, utilizing the simplistic beauty of the pixel.

“I think we’re witnessing a very interesting time. Although pixel art has been around for a long time, I think it’s now that people start to perceive it as a legitimate artistic medium that does not have to be subject exclusively to video games. We see some artists using pixel art to create works of animation or, as in my case, using it as a way to tell stories and create interesting pictorial compositions,” Navarro said.

Years after returning from New York and getting a job working in social media, BurritoEclair has also been able to find work in pixel art outside of video games.

He said that the Internet makes it easier to find pixel art work and make a little money on the side of his regular job. Places like /r/gamedevclassifieds, the website PixelJoint and occasionally Twitter all provide accessible spaces for people to request and find jobs. “The jobs aren’t really consistent since I’m not as on top of the gig hunt as other artists. But again it’s something I’m treating as a fun hobby with some monetary benefits,” BurritoEclair said.

Pay for a pixel artist really depends on the work that you take on, he said, and the things he works on are more often gifts than game assets.

“Last month I made a series of pixel art profile portraits for Twitter folks in the indie game development world. That was like $15 a portrait and I made around 10 of them, which was my whole weekend and some of Monday and Tuesday,” BurritoEclair said. “I did a bunch of graphics for a co-worker’s kid’s birthday. Stuff comes around.”

The internet has expanded and connected groups and individuals in search of work within the pixel art community, as well as anyone looking to just improve their pixel art skills as a hobby. Many groups have formed online to support the hobby, such as the aforementioned /r/PixelArt and PixelJoint website. But over the past year one group has emerged and garnered a massive following: Pixel Dailies.

Pixel Dailies — or to those who participate, @Pixel_Dailies — is a Twitter account that tweets a new pixel art challenge each day. It is the brainchild of Benjamin Porter(@eigenbom).

Porter had been working on his own game Moonman for almost two years when he decided that he needed to level up his pixel art skills. And Pixel Dailies was born.

“I started the Twitter account as an incentive to practice and also to hopefully find other people who would be up for the same challenge,” Porter said. “The idea comes from the Sketch Dailies group which focuses on illustration rather than pixel art.”

He has found quite a few other pixel artists who are up for the challenge. Currently almost 17,000 people follow Pixel Dailies on Twitter. Hundreds of submissions are submitted each day and it has grown into a huge community for people interested in pixel art.

“Everyone involved is extremely supportive of each other, and personally I’ve made many friends through the group. Twitter is a really great platform for these daily challenges. We keep the barrier for entry low by including all experience levels,” Porter said.

BurritoEclair applauded Pixel Dailies as well, stating that it is probably the best place for someone just getting into pixel art to hone their skills. He also explained that — much like the skill of a new pixel artist — the medium of the pixel has been practiced and honed over time.

The art form, which started as a way to make simple computer graphics and extended into the artwork of the first video games, is a constantly evolving medium. Video game designers are continually pushing the boundaries of the medium and artists are beginning to find ways to create expressive pieces with simple pixels.

“Pixel Art in the past was pretty restricted by the hardware of consoles and arcade cabinets. If you look at NES games along a timeline, you’ll notice the improvement in art. The first ‘Mario Bros.’ game looks like it was made for the system that predates the third ‘Mario Bros.’ game,” BurritoEclair said. “That is the artists learning how to abuse their restrictions.” 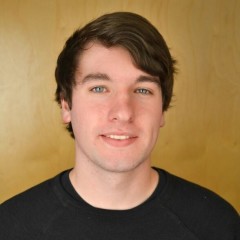 Russell writes about culture and the arts, and anything else that catches his interest. You can find more of his writing on The News Record website, his portfolio website and his Twitter. He is also building up a collection of interviews with pixel artists and game-makers on his blog Home of Pixels.